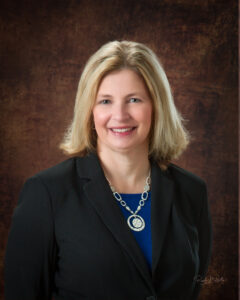 Mrs. Bridges has served on the Cleveland County Water Board of Commissioners since December 2009.

Mrs. Bridges was born and raised in Polkville, NC where she graduated from Burns High School in 1985. She went on to obtain a Bachelor of Science in Agricultural Mechanization and Business from Clemson University in 1989.

Mrs. Bridges has been employed with the Town of Forest City as the Downtown Community Development Manager since 2014 where she is responsible for numerous projects associated with the revitalization of the downtown, Main Street Program and numerous travel and tourism events. Prior to her time with Forest City, Mrs. Bridges worked for Isothermal Planning and Development Commission from 2010-2014 which is a regional Council of Governments for Cleveland, McDowell, Polk and Rutherford Counties and all the municipalities therein. She was also employed with Cleveland County Schools from 2007-2009 and most notably with the United States Department of Agriculture (USDA) Natural Resources and Conservation Services from 1989-2006 which gives her a wide background in many natural resources and environmental issues. Mrs. Bridges is currently serving as the Secretary for the County Association of Government Officials (CAGO) and is a member of the Rutherford County Tourism Development Authority Board.

She has been married to her husband Kevin since 1989 and they have two grown children. In her spare time, she enjoys attending outdoor music festivals and concerts of all kinds as well as reading many newspapers daily to stay up to speed on news and current events.