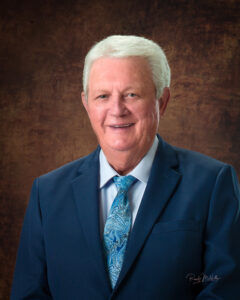 Mr. Melton was born and raised on his grandfather’s farm in Casar, NC where he lives to this day. He graduated from Casar High School in 1959 where he was a player on the two-time undefeated and County Champion basketball teams in 1958 and 1959. He went on to attend and graduate from the Winston-Salem Barber School in 1961 with a Master Barber License.

Mr. Melton began his career as a local barber in 1962 with the former Cleveland Barber Shop. In 1967 he became the co-owner and operator of Cantrell & Melton Barber Shop in uptown Shelby, NC. He became sole owner in 2014 after his longtime partner and friend retired where he still works a minimum of three days per week. He is also the owner and operator of Don’s Pond since 2008, a wedding and special event venue in Casar, NC.

Throughout his life, Mr. Melton has been involved and an active participant on many school and community events in support of his family and friends. He has been married to his wife Brenda since 1994, and together they have three grown children and seven grandchildren.

Mr. Melton is a member of Big Springs Baptist Church where he is a member of the Brotherhood, serves on the Nominating Committee and also serves as an Usher. He has also served as a Deacon and Chairman of Deacons in another church he attended in the past.