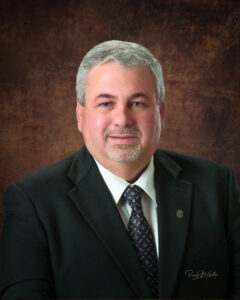 Mr. Brooks has served on the Cleveland County Water Board of Commissioners since December 2015.

Mr. Brooks was born and raised just outside Lattimore, NC. He graduated from Crest High School in 1982 and went on to attend the University of North Carolina at Charlotte.

Mr. Brooks has been a Partner in Beam Edwards & Brooks General Contractors since 1993. From 1985-1983 he was the owner and operator of Tony M. Brooks Construction. He earned his Eagle Scout Award from the former Troop #113 in Lattimore. He has been a long time member of the Boy Scouts of America and has served on the Battleground District Eagle Board of Review. He has served on the Board of the Cleveland County Children’s Homes and served as President, the Cleveland County Home Builders Association and served as President. He is a past Kiwanis Club member and is still an active member of the Crest Horseshoe Club where he has served as past President. He has been a lifelong member of Double Springs Baptist Church where he has served as a Deacon as well as various other committees.

Mr. Brooks has been married to his wife Tammy since 1985 and they have two grown children and one child in high school.

In his spare time, Mr. Brooks loves attending all high school sports as well as cooking Barbecue for numerous functions and organizations.